On 24 November 2018 my daughter and I attended the London Weston A. Price Foundation Traditional Foods and Health Event. It was really good. Great speakers and an amazing lunch! 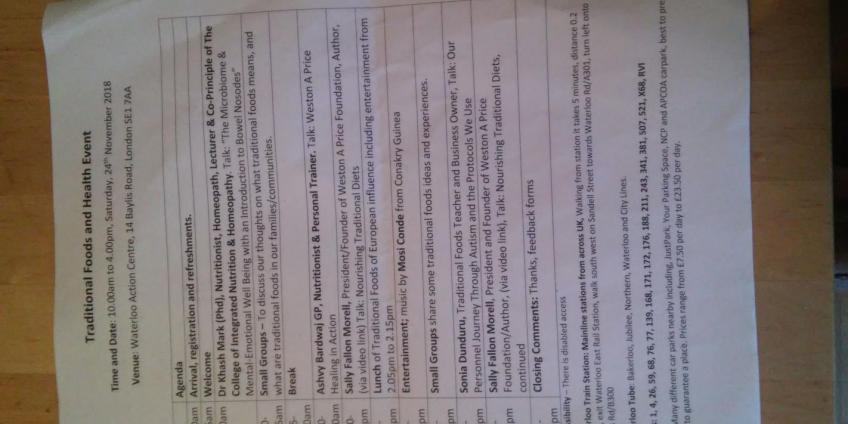 I love going to conferences about nutrition. So when the Weston A. Price Foundation Traditional Foods and Health Event was announced I decided I really wanted to go. Some of the speakers I really wanted to meet and see how they looked at things and how they spoke about it.
I myself am not very confident about public speaking. I find it quite scary. So I'm always very impressed with people who do it.

I ended up going with my oldest daughter who is also quite interested in nutrition. We went by public transport as the venue was very close to Waterloo Station, so this was simply the easiest way of doing it.

When we arrived we right away saw some food and drink stands, which is always great. And there was also, just like the last conference, The Real Food Company with quite a large amount of nourishing food products, books and other lovely things. They are a whole foods store, which has a shop and an online shop. I love their products. Their products are Weston A. Price type of very nourishing foods.

Very close to the entrance there was someone with milk kefir. One was made with coconut and very very tasty. I bought it a few times myself as it was lovely in flavour and it's a very healthy, refreshing, fermented and nourishing drink.

On the other side of the entrance was a table with all kinds of information from the Weston A. Price Foundation and others who work according to the principles. Therefore I asked if I could put my cards on the table as well. That was fine. At the end of the day I found that several had been taken, which was nice.

The first speaker van Dr. Khash Mark. She talked a lot about the Microbiome, which is a topic I am very interested in. Her slides were amazing, so much good information.

Then there was some talking in small groups, which was really nice as we got to know some of the people sitting near us.

After this was Ashvy Bardwaj. She talked about the difference that a good diet can make in getting pregnant and being healthy and having a healthy baby. She mostly talked about her own personal journey, but it is so fitting with what I offer people through my coaching. She explained how she had trouble conceiving for some years. Then ended up with a chance in diet, which was more in line with the guidelines of the Weston A. Price foundation and ended up conceiving very quickly after that chance. She also showed pictures of the shape of her child's face, which are amazing. I have the same experience myself with my 3rd child. She has an amazing face shape and all her teeth fit in her jaw. Loved this talk.

Following was the first part of the talk of Sally Fallon, the Founder and President of the Weston A. Price Foundation. I have seen her talks several times now and, although she does do it somewhat different every time, i pretty much know what is next. I don't mind watching her speak, as I do pick up something different every time. I also enjoy the way she presents, so it is never boring, it is just that I know most of the information already as it is geared to people who do not know much yet.

An amazing lunch followed. My daughter and I both totally enjoyed the lunch. It had a lot of variety so that there was something for everyone.
The main course was chicken, which was made with ras-el-hanout. There were 2 types of sauerkraut, one spicy with a spicy sausage in there. The other was more of the simple German style sauerkraut. There was liver pate, which was very, very tasty. There was also quinoa. i had never eaten that before, so it was quite nice to taste it and I found it very tasty. There were other foods as well, but there was only so much I could try.
Dessert was a fruit salad with banana, apple and mandarin. There was yoghurt and coconut yoghurt. Both yoghurts had forest fruits in there. Furthermore there was raw cheese. My daughter and I took a little bit of everything and were impressed by how tasty it all was.
This lunch certainly gave me ideas again for nice home cooked food. Sometimes I end up with a lack of knowing what to do next. This lunch certainly gave me inspiration and I have been on a spree of once a week a tagine type dish. So far all have been great!

During lunch there was a musician who played lovely African tpye of music. His name is Mosi Conde. I'm sure you can find him online when you do a search, so you can have a look and have an impression of the music we listened to during lunch.

After lunch there was again some talking in small groups planned. During lunch we had also done this already with the people at our table. We had some great conversations.

The cook of lunch came to speak once the talking in small groups had finished. Her name is Sonia Dunduru. She was very interesting to listen to as she had had a similar journey to the one I had with my oldest child. We went through the GAPS diet to help her with her dyslexia and autism and it was very good that we did as it changed so much for her and the rest of our family.

Sally Fallon presented part 2 of her talk at 3pm, about which I described a little above already.

This was the end of the day, which I really really loved and so did my daughter. When another conference is organised we will go again.